Why am I Seeing 2nd Graders in Braces Already??

Do you remember the days when braces were a teenager’s rite of passage? When we were growing up our friends didn’t get “a mouth full of metal” until their early – or even later – teen years.

Now, orthodontists are dialing braces back to the grade school years. Why is that?

Dr. Kevin Knapp, Byron Center orthodontist, says that age 8 is the sweet spot because it’s between the time when children lose their baby teeth and get their permanent teeth. Tooth and jaw problems are also more easily assessed at this time.

Sometimes, the recommendation for kids at this age is to wear an expander. Expanders create space for teeth in a person’s mouth.

When I first heard of expanders, it sounded like some kind of medieval torture device. I honestly questioned the choices of the parent who was doing this to their poor child.

Now that I’ve seen my son using an expander (he had a mouthful of teeth that his tiny mouth couldn’t quite hold) I see the wisdom of starting the orthodontic process at a much younger age. 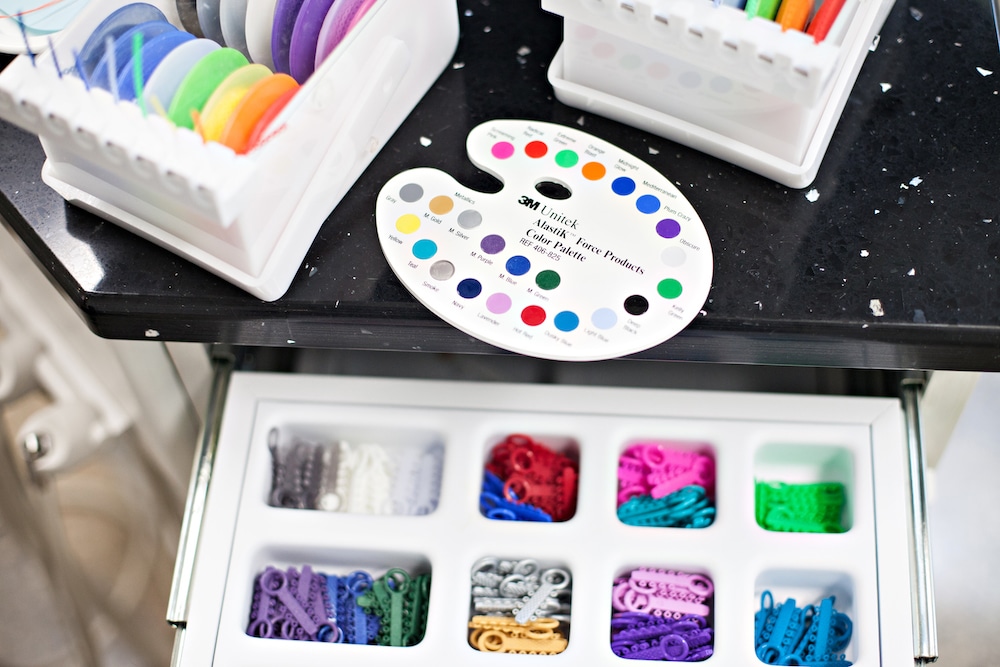 Have you been noticing more and more children around 8 or 9 years old beginning orthodontic treatment? Or maybe your child’s dentist has encouraged you to see an orthodontist for a consultation simply as a matter of course.

If that’s your experience, the message is getting out: getting an orthodontist consult for your 8-year-old is a smart move that could save you money and help you avoid more extensive orthodontic treatment in the long run.

Yes, an 8-Year-Old Really Does Need an Orthodontic Consultation

Another reason why 8 is a magic number is because eight years old is the optimal time for an orthodontist to step in and prevent serious issues in the transition to adult teeth.

“At that time, every play in our orthodontic playbook is open,” Dr. Knapp says. 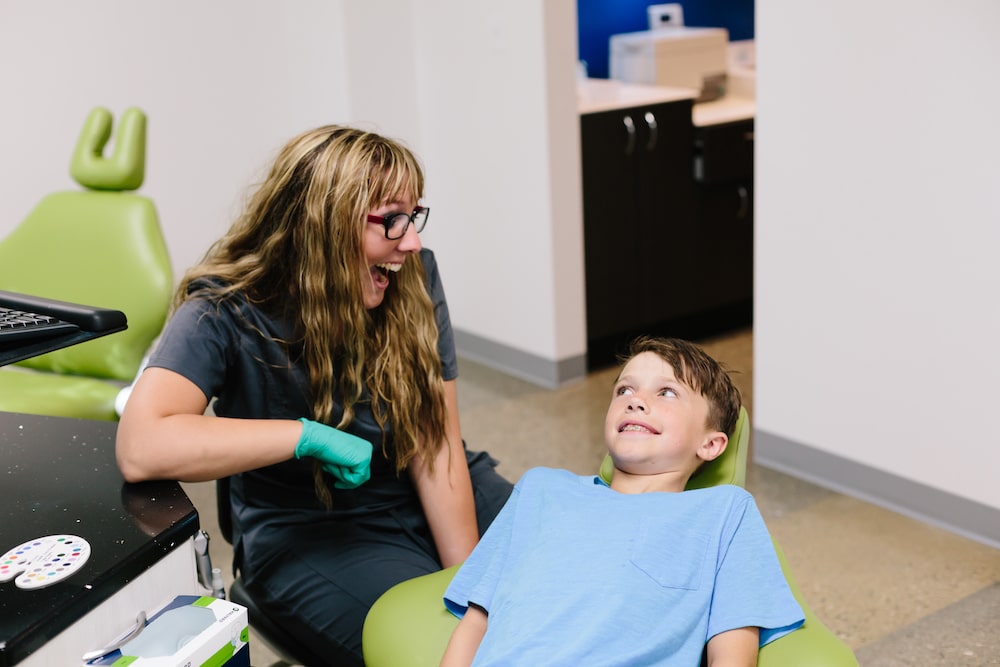 Dr. Knapp uses the term “interceptive” treatment rather than “Phase 1.” The word “phase” implies there will be multiple phases. That is not always the case.

“I’m not a huge two-phase orthodontist. I would rather start early and not need later treatment, if possible,” says Dr. Knapp.

While there are definitely some kids who need interceptive treatment combined with treatment, later on, Dr. Knapp’s preferred plan is to expand the jaw and give the adult teeth plenty of space to come in and use braces as necessary.

“A lot of the time a child doesn’t need to begin orthodontic treatment at age 8. It just may be a matter of needing a baby tooth wiggled out to allow an adult tooth to erupt.”

Seeing an Orthodontist Before Problems Are Apparent Makes for Shorter, Easier Treatment

Dr. Knapp says an earlier consultation also gives an orthodontist a baseline to monitor growth and development over time. Treating a child at age 8 or 9 lets an orthodontist prevent problems before they appear outwardly.

“Of course, we are interested in where the teeth end up, but we are also interested in measuring jaw growth and development over these critical ages to make sure the child doesn’t end up with a big underbite or a really big overbite.

Since having 8-year-olds routinely see orthodontists is a new idea for many parents, Dr. Knapp works to educate local dentists.

He is certified for continuing education courses in the State of Michigan and visits general dentists in the Grand Rapids area. The goal is to educate offices on why dentists should encourage parents to send 8 and 9-year-olds for an orthodontic consultation.

Dr. Knapp says there’s one sign that can tell parents if early intervention is needed: If you notice in smiling pictures that your kid is shifting his jaw, that is a sign that the upper and lower jaws are not lining up well, and they have a crossbite.

Speaking of smiling, Dr. Knapp says orthodontics is good for our overall health and happiness, not just our mouths. He says research shows adolescents who go through orthodontic treatment have higher confidence and self-esteem.

“They are more likely to participate in choir, theater, sports, band, any of these activities where you get up in front of people. Kids do that at a much higher rate if they’ve been through orthodontic treatment,” Dr. Knapp says.

Of course, the goal of anyone’s orthodontic treatment is a healthy smile. Dr. Knapp says a confident smile goes a long way toward being successful in life – whether it be making friends or being in a job interview – smiling is one of the principle forms of communication. 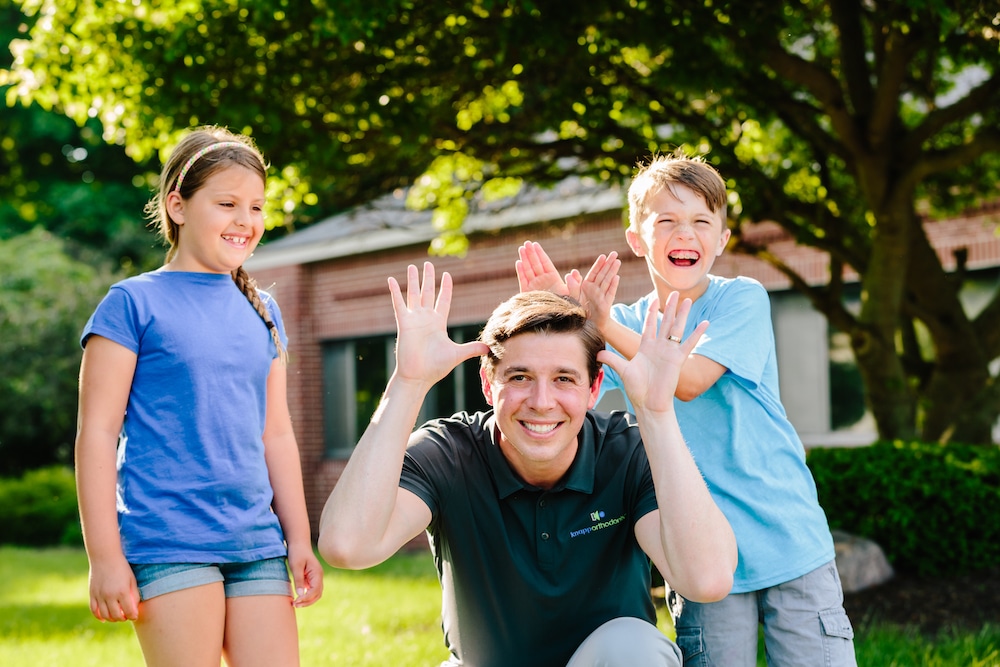 Michelle Smith lives in Lowell with her husband. She’s an avid homeschooling parent: three of her children are homeschooling graduates and the remaining three are still at home under her tutelage. Michelle also enjoys classical ballet and live theater, especially musicals, both being in the audience and working backstage.

Ready to Get Started?